It was never going to be easy to have a presence at three major international exhibitions in the space of just 9 days but through careful planning and the diligence of a dedicated team of sales staff on both sides of the Atlantic, we did it – and did it very well!

In Hannover, Germany and after five action-packed days at the world’s leading trade fair for industrial technology, the organizers spoke of a thriving event; a large number of solution-seekers immersing themselves in the potential of intelligent robots, adaptive machines and integrated energy systems, taking attendance to new heights.

Precision Ceramics exhibited at Hannover Messes as part of the Ceramic Applications Group in Hall 6. On Stand B16, managed all week by Ben Staniforth and Nigel Johnson, we highlighted our extensive range of products and services with a comprehensive display of bespoke technical ceramic components manufactured from Macor® Machinable Glass Ceramic, Shapal™ Hi-M Soft Machinable Aluminium Nitride and various other technical ceramic materials. Also on public display for the first time was our new and extensive range of in-house manufactured ceramics including CeramAlox® (Alumina), CeramAlum® (Aluminium Nitride) and CeramaZirc® 3YZ, 3YZ Plus and Nano HIP Sintered Zirconia.

The next HANNOVER MESSE will run from 23rd to 27th April 2018 with Mexico as its official Partner Country.

On the other side of the Atlantic …

The third Ceramics Expo closed its doors on 27th April after another year of attendee growth and amid a great wave of optimism for the future. Over 300 exhibitors set out their stalls in Cleveland’s impressive I-X Center and they didn’t have to wait long for an excited response from exhibitors and visitors alike.

This year’s expo offered more booths, a broader selection of technologies, a record number of live demos and more countries represented than ever before, bringing an altogether wider perspective – a real panorama of innovation.

With a similar focus to Hannover but under the banner of ‘Specialist Ceramics for Demanding Applications’ Precision Ceramics combined a comprehensive display of traditional ceramics – Macor®; Shapal™ Hi-M Soft; Boron Nitride – with the company’s new and extensive range of in-house manufactured Nano and hipped materials and a brand new range of AlN Tokuyama Powders and Barat Metalised Ceramics.

And south to Houston …

The Offshore Technology Conference (OTC) is where energy professionals meet to exchange ideas and opinions to advance scientific and technical knowledge for offshore resources and environmental matters.

OTC is the largest event in the world for the oil and gas industry featuring more than 2,300 exhibitors, and attendees representing 100 countries. Founded in 1969, OTC’s flagship conference and exhibition is held annually in Houston, the ‘Oil Capital of the World’.

Precision Ceramics exhibited within the UK Pavilion organised by the London-based Energy Industries Council (EIC). Here, on Stand 1639C, the main focus was on our new range of ultra-high performance hipped ceramics for the most arduous offshore oil & gas applications. 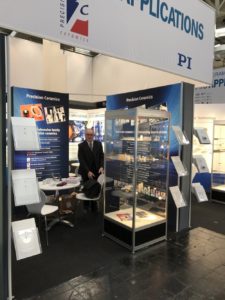 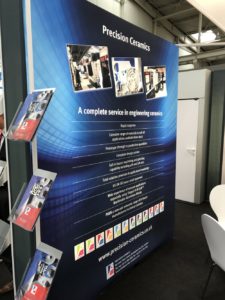