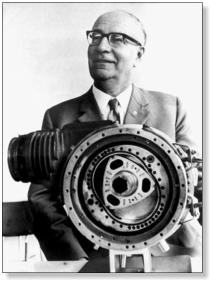 It’s 85 years since German Engineer Felix Wankel (right) first patented his design for a rotary engine. Development began in the 1950’s and by 1957 a working prototype had been built.

NSU Motorenwerke AG, the well-established German manufacturer of automobiles, motorcycles and pedal cycles and more commonly known simply as NSU, subsequently licensed the design of the Wankel engine to many companies around the world and whilst the basic design concept of the engine has remained steadfastly the same, many improvements have been made over the years.

Whilst the design of the engine has enjoyed unprecedented success, one common problem has been the seals between the rotor and housing most commonly known as ‘tip’ or ‘apex’ seals. These have a tendency to wear against the rotor housing and over a period of time can distort causing a loss in compression and decrease in performance. In extreme cases, this distortion can stop the engine working altogether.

One solution to this problem has been to install ceramic tip seals manufactured from a special type of silicon nitride. The seals – designed and manufactured by Precision Ceramics – provide an added degree of hardness and toughness over conventional steel seals which extends the operating life of the engine and reduces maintenance costs and downtime.

Unlike conventional steel seals, ceramic tip seals are dimensionally stable through all temperature ranges. They are manufactured to such high tolerances   that the wear-in time is virtually negligible. Additionally, the seals have an almost perfect surface finish which promotes a better and longer lasting seal between the rotor and the housing.

In a rotary engine running at a low RPM, there is very little centrifugal force acting on the tip seal, the only force pushing the seal against the rotor housing coming from the seal spring. As the RPM increases, a combination of the spring force and the force of gases under the seal results in a much higher force between the seal and the rotor housing. As ceramic seals are much lighter than their steel counterparts, they are much less affected by these additional forces which results in less tip chatter and greatly improved performance.

Precision Ceramics have wide experience in tip seals and are enable to engineer bespoke seals for almost any rotary engine application.