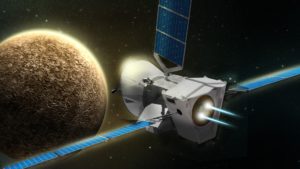 Having successfully designed and manufactured a series of highly technical ceramic components which have been used in spacecraft visiting Mars, Mercury and Saturn, the close association of Precision Ceramics with space exploration has taken another giant leap forward with the latest mission to the smallest and innermost planet in the Solar System.

BepiColombo is a planned European-Japanese mission to Mercury and successfully blasted off from Kourou, French Guiana, on its long journey on Friday 19th October. The spacecraft, carried out of the earth’s atmosphere by an Ariane 5 ECA rocket, will spend seven years cruising towards its target using several gravity assists from other planets along the way.

It will fly by Earth and Venus in 2020, Venus in 2021 and Mercury itself between 2021 and 2025. These flybys will slow down the spacecraft enough to be captured by Mercury’s gravity in December 2025. Here it will separate from the MTM into the two separate orbiters and circle Mercury for a year – or two if the mission is extended. The measurements taken there could not only solve lingering mysteries about the innermost planet, but also about the formation of our solar system and its distant neighbours.

The MTM itself incorporates specially designed T6 ion thrusters which provide the electric propulsion for the long seven-year journey to Mercury. Gridded electrostatic ion thrusters, like the T6, utilize xenon gas as a propellant and can even accelerate to a speed 15 times greater than a conventional chemical thruster.

It is within the MTM that Shapal Hi-M Soft™, cable clamps and terminal blocks designed by QinetiQ and manufactured by Precision Ceramics are incorporated.

As in many space applications, technical ceramics can provide an excellent size-to-weight payoff, a key advantage for those used in the BepiColombo MTM thrusters.

Shapal Hi-M Soft™ is a machinable ceramic which combines a high thermal conductivity with a high mechanical strength and with bending strengths of 30 kg/m. It has an excellent sealing ability to vacuum, good heat resistance and an extremely low coefficient of thermal expansion –  a perfect combination of technical properties for spacecraft.

Precision Ceramics is the principal UK distributor for Shapal Hi-M Soft™ which forms an important part of the company’s wide portfolio of technical ceramics available for an ever-increasing array of worldwide applications on earth – and many billion miles beyond!

Below: The BepiColombo MPO being placed in Phenix thermal vacuum test facility. 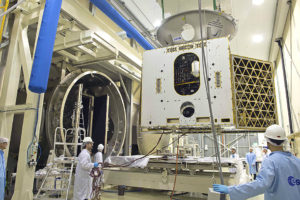