For seven days at the start of February, four people from Precision Ceramics HQ in Birmingham took teambuilding to a whole new level as they travelled to Andorra to venture onto the snowy slopes of the Pyrenean Mountains for a week’s skiing.

One of the most popular resorts in Europe, the small landlocked Principality of Andorra nestles between France and Spain and provides an excellent alternative for skiing away from the busier slopes of Austria, France, Italy and Switzerland. Set in the heart of the Pyrenees with dramatic panoramic views, Andorra has some of the best skiing around and coupled with a lively après ski, this tiny principality – the sixth smallest nation in Europe – has something for everyone.

Only three days before they arrived a massive amount of fresh snow fell leaving depths on the piste of between 1.3 and 1.7 metres. As a consequence, the roads around Toulouse Airport became snow-bound and they had to fly into Barcelona and travel by coach to their mountain resort of Grandvalira.

With more than 210 km of runs, 118 slopes, 64 lifts and 3 freestyle areas, Grandvalira is the largest ski domain in the Pyrenees and is credited with covering the most extensive skiing surface area in the South of Europe. Situated in the Eastern valley of Andorra, Grandvalira offers the choice between seven different sectors so as to satisfy the most demanding customers. The resort is home to the only run in Andorra where international Alpine Ski competitions can be held – one of the few in the Pyrenees. Grandvalira has also hosted several races of the World Cup and is a candidate to organize international Alpine ski competitions on its FIS homologated runs.

The resort’s popularity has grown with the burgeoning ski and snowboard industry in the principality: it is the highest resort in Andorra (2,100m above sea level with the highest peak being 2,600m), has the best snow record and is the easiest to get to from Barcelona or Toulouse airports – normally that is! Consequently it attracts a large number of British and Irish winter sports enthusiasts as wel 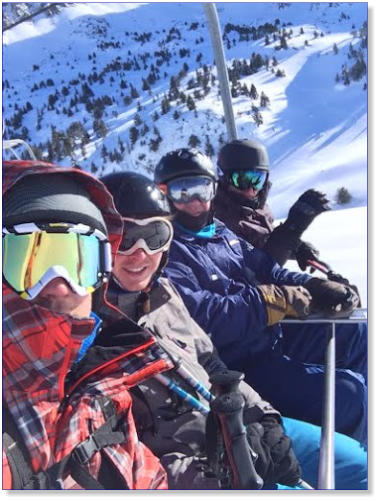 l as French and Spanish. It is also favoured for its southern latitude and duty-free status which for many overcome the drawbacks of the long airport transfer times.

Steve, Jasper, Ben and Alan are all reasonably experienced skiers and out of the seven days they stayed in Grandvalira, six days were spent on the slopes in temperatures ranging from -5°C to -15°C with a wind chill taking the temperature down to -26°C on occasions.

A truly great time was had by all and our fearless four returned via the now accessible Toulouse Airport with little more than the odd scratch and bruise but with lots of happy memories … the photographs say it all!