At one stage earlier in the year, a clash of dates for two major exhibitions left Precision Ceramics wondering how to manage the two events, 5,874 miles apart, during the same week in October.

But now, with careful planning of resources and personnel, we can confirm that a stand has been secured at both exhibitions and that we will continue to follow our usual promotional pattern of having an annual trade show presence at one event in Europe and another in the USA. 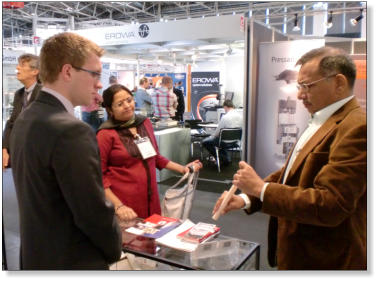 The Precision Ceramics Stand Number is 626 and will be managed by Sales Director, Geoff Randle, and US Operations Manager, Jasper Curry.

The AVS International Symposium and Exhibition has been developed to address cutting-edge issues associated with vacuum science and technology in both the research and manufacturing communities.

More than 3,000 scientists and engineers gather from around the world to attend. Short courses are offered in conjunction with the International Symposium providing specialized training in specific areas of vacuum science and related technologies, an area in which Precision Ceramics has particular expertise.

Usually staged every three years during late Spring, Ceramitec 2015 will be held at Messe Munich from Tuesday 20th to Friday 24th October.

Precision Ceramics have a corner stand position (number 428) in Hall B1. It will be managed by Managing Director, Steve Swallow and Sales Executive, Ben Staniforth, with a little help from Director of Development, Lucian Falticeanu.

2015 will be the 9th consecutive time that Precision Ceramics have exhibited at Ceramitec and, once again we will be taking our place in the worldwide community that continues to make the exhibition so successful.

It`s not only the products and technologies on show at Ceramitec that are innovative. The supporting program too is right at the cutting edge, exploring the trends that are going to shape the industry over the coming years.

Precision Ceramics are keener than usual to be at both events this year with an exciting new range of components to display and services to and talk about to the truly international audiences attending on both sides of the Atlantic.