Within today’s industrial world, there is the widest possible choice of temperature measuring devices available. Of these, probably the most common and widely used is the thermocouple.

Thermocouples are the most durable temperature sensors. They are easy to use and also very economical. Results from them are obtained very quickly and they are very user friendly.
There are many advantages of using thermocouples over other devices that are used to monitor temperature. There are also many different types of thermocouple available for every possible industrial application. Some of the most commonly used are …

As there is such a wide choice available, in selecting the best type of thermocouple for the application in hand there are various factors that need to be considered. These include installation requirements, abrasion and vibration resistance, temperature range and chemical resistance. It is in these last two areas that ceramic tubes and insulators from Precision Ceramics play an essential role. 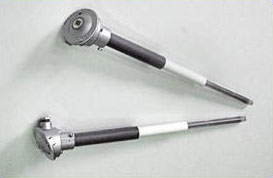 bility and performance of production processes especially within hostile and aggressive chemical environments at temperatures up to 1,700°C.

A thermocouple is a temperature-measuring device consisting of two dissimilar conductors that contact each other at one or more spots. The thermocouple produces a voltage when the temperature of one of the spots differs from the reference temperature at other parts of the circuit. As well as being used for temperature measurement and control, a thermocouple can also convert a temperature gradient into electricity.

Commercial thermocouples are inexpensive, interchangeable, are supplied with standard connectors and can measure a wide range of temperatures. In contrast to most other methods of temperature measurement, thermocouples are self-powered and require no external form of excitation. The main limitation with thermocouples is accuracy; system errors of less than one degree Celsius (°C) can be difficult to achieve.

History In The Making

It was in 1821 that Thomas Johann Seebeck, a German–Estonian Physicist, discovered the thermoelectric effect, where a junction of dissimilar metals produces an electric current when exposed to a temperature gradient. Nearly 200 years on, this is now called the Peltier-Seebeck effect and is the basis of all thermocouples.

Any junction of dissimilar metals will produce an electric potential related to temperature. Thermocouples for practical measurement of temperature are junctions of specific alloys which have a predictable and repeatable relationship between temperature and voltage. Different alloys are used for different temperature ranges. Properties such as resistance to corrosion may also be important when choosing a type of thermocouple. Where the measurement point is far from the measuring instrument, the intermediate connection can be made by extension wires which are less costly than the materials used to make the sensor. Thermocouples are usually standardized against a reference temperature of 0 degrees Celsius; practical instruments use electronic methods of cold-junction compensation to adjust for varying temperature at the instrument terminals. Electronic instruments can also compensate for the varying characteristics of the thermocouple, and so improve the precision and accuracy of measurements.

In recognising the importance of thermocouples for industrial applications, Precision Ceramics has introduced a range of advanced ceramic tubes and insulators manufactured from two specific types of material.