Silicon Nitride (Si3N4), just like its close family relation silicon carbide, is one of the toughest technical ceramics available. Over the years it has been successfully used in a wide and interesting field of applications ranging from automotive engine components to roller bearings for the most exclusive skateboards (right).

Silicon Nitride is a hard, solid substance, that can be obtained by direct reaction between silicon and nitrogen at high temperatures. Silicon nitride is the main component in silicon nitride ceramics, which have relatively good shock resistance compared to other ceramics. 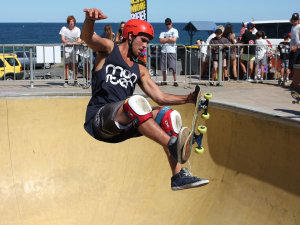 In microelectronics, silicon nitride is usually formed using chemical vapor deposition (CVD) method, or one of its variants, such as plasma-enhanced chemical vapor deposition (PECVD). It is usually used either as an insulator layer to electrically isolate different structures or as an etch mask in bulk micromachining. As a passivation layer for microchips, it is superior to silicon dioxide, as it is a significantly better diffusion barrier against water molecules and sodium ions, two major sources of corrosion and instability in microelectronics. It is also used as a dielectric between polysilicon layers in capacitors in analog chips.

Bulk, monolithic silicon nitride is used as a material for cutting tools, due to its hardness, thermal stability, and resistance to wear. It is especially recommended for high speed machining of cast iron. For machining of steel, it is usually coated by titanium nitride (usually by CVD) for increased chemical resistance.

Natural existence of silicon nitride is restricted to meteorites, where it very rarely occurs as mineral nierite.

NASA Scientists recognised the its unique properties when silicon nitride bearings were used in the main engines of the Space Shuttle. It was identified as one of the few monolithic ceramic materials capable of surviving the severe thermal shock and thermal gradients generated in hydrogen/oxygen rocket engines and proved completely reliable throughout the entire Space Shuttle programme.

Just like carbides and oxides, nitrides too are very hard wearing and require diamond-grinding methods to process once fired. And just like silicon carbide, silicon nitride in particular is used for applications in which physical wear is a major consideration.

At Precision Ceramics, both silicon carbide and silicon nitride sit alongside each other in the company’s vast material stores and are used for a wide range of technical components for an equally wide field of applications.

In petrol engines silicon nitride is used for rocker arm pads for lower wear and in exhaust gas control valves, increased acceleration is achieved by the materials use. It is currently estimated that more than 300,000 sintered silicon nitride turbochargers are made annually! 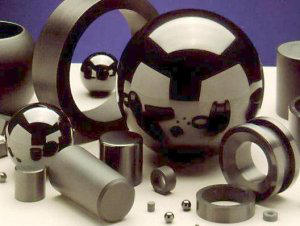 Since silicon nitride ball bearings (left) are harder than metal, contact with the bearing track is reduced resulting in up to 80% less friction and a service life between three to ten times longer than steel.