Ceramics & Electromagnetism – The Use of Specialist Ceramics in MagLev Transportation …

Over the years, the discovery of high temperature ceramic superconductors has changed superconductivity from an interesting curiosity into a useable technology with significant applications in the medical and transportation fields.

MagLev Trains, for instance, are trains that rely on magnets or magnetic force to run or levitate. There are and have been many MagLev projects but they have all differed in the way the magnetic field was generated and the materials used to achieve it.

Superconductivity occurs in certain materials when zero electrical resistance is observed. The transition temperature at which the resistance becomes zero is known as the critical temperature.

In the early days of superconductor development, most applications involved simple elements like tin and aluminium, various metallic alloys and some heavily-doped semiconductors.

To overcome the problem of having to cool the superconductors to extremely low temperatures and move forward with this exciting new technology, other superconductors with a higher critical temperature would have to be discovered. In 1987, Yttrium Barium Copper Oxide became one of the first. It could be cooled with liquid nitrogen rather than liquid helium and was therefore not only more practical but more cost effective as well. 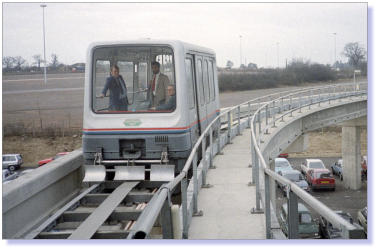 At the moment there are only a few MagLev Systems which are used commercially. These include the Shanghai Maglev Train which started construction in April 2001 and began operation in 2004 between Shanghai Pudong International Airport and the outskirts of central Pudong.

The top operational commercial speed of this train is 268 mph (431 km/h), making it the world’s fastest train in regular commercial service.

Another MagLev System is the Limino Line in Japan. This is a nine-station line in Aichi which opened in 2005. Although it has been very successful, few other MagLev trains are currently open to the public.

Another major milestone in MagLev transportation began in 1990 in Japan with the construction of the 11 mile long Yamanashi Maglev Test Track (below) which between 1997 and 2011 was used to test MLX01 vehicles. After a temporary closure during which the line was extended to 26 miles and upgraded to commercial specifications, testing resumed in June 2013 with a five-car train being tested at speeds up to 312 mph (500 km/h).

In the early versions, the magnets where cooled by liquid helium. Later versions used rare earth ceramic materials as magnets. These had the property of crossing the supermagnetic threshold at higher temperatures with liquid nitrogen being used as a cooler.

The main advantage of this system is that the onboard magnets allow a bigger levitation space which translates into higher speeds.

In one of the latest MagLev developments, Japan has promised to provide the United States with loans to cover half the cost of a high-speed MagLev train link between Washington DC and Baltimore which will reduce the journey time to just 15 minutes!

It has to be said that the highly specialist ceramics used in MagLev transportation are a far cry from the technical ceramics which form the backbone of the Precision Ceramics business. Just the same, their application is equally important which can be clearly seen from the ever-widening field of applications in which they find particular use.

The L0 (L-zero) series magnetic-levitation train, developed by Central Japan Railway Company sits parked on a test track at the control center before a trial run in Tsuru, Yamanashi Prefecture.