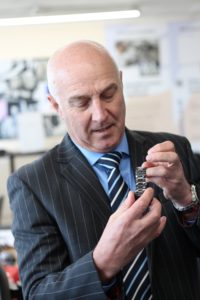 After a highly successful career in technical ceramics spanning 40 years, Geoff Randle’s contribution to the success of the Birmingham-based McGeoch Technology Group was rewarded this week with a gold watch in recognition of 25 years loyal service.

Geoff first joined the Technical Ceramics Division of Smiths Industries in 1977 and left to join McGeoch in February 1992. Later that year he was responsible for setting up Precision Ceramics who, 25 years on, have become a world market leader in the design, manufacture and    machining of bespoke and advanced technical ceramic components for an ever-widening array of worldwide applications.

Nowadays a director of both McGeoch Technology and Precision Ceramics, Geoff also became an Executive Vice President of Precision Ceramics USA when the first overseas subsidiary of the company was formed in Tampa, Florida, in 2009.

Below: Geoff surrounded by his colleagues at his 25 year award presentation. 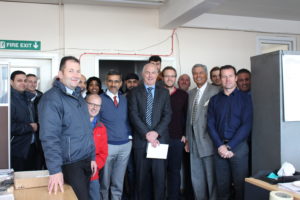