The history of speed shows the greatest ingenuity, in developing from a single horsepower to some of the mightiest machines traveling at the greatest velocities.

Speed has always required cutting edge technology to continue breaking the constraints, to allow us to move faster, in a whole range of environments.

Ceramics have enabled the manufacture of machines to travel at speeds in harsh environments, particularly in the last decades where any increase in speed causes an increase in friction in our atmosphere, to the point where the heat generated from atmospheric friction can erode the materials used. High temperature requirements, combined with other demands for lightweight materials and resistance to wear, materials in the Boride, Nitride and Carbide groups combined with transitional elements such as tantalum, Hafnium, and titanium are some of the materials being used.
Precision Ceramics range of ceramic materials offer varying characteristics to match similar demanding requirements. 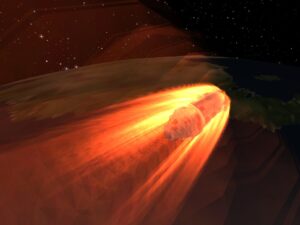 Manned Space craft re-entering the earth’s atmosphere from low earth orbit can be traveling at over 10,000 meters per second with re-entry temperatures of over 1800c, this is above the melting point of steel, and the glow from the heat shielding can be easily seen during this deceleration.

The space shuttle ceramic shielding was the one of the stories in this phase of space exploration, but the shuttle itself was only capable of 18,000 miles an hour in space.

Ceramics within the atmosphere have reached their greatest challenge with the dawn of Hypersonic flight. Hypersonic is classed as Mach 5 or above, possibly up to Mach 15, but at Mach 5 or 3800 mph, temperatures are already at 1800c on the leading edges. In comparison a typical rifle bullet travels at only Mach 3.

A projectile traveling at Mach 15, could be seeing temperatures of over 6000c in the Atmosphere. The current best ceramic Hafnium Carbide has a melting point of 3958c, so the challenge is the protection of a projectile not from the enemy but from nature.

Ultra-High Temperature ceramics (UHTC) are classed as those with Melting points over 2000c so you can see the challenge.  The elevated temperature combined with the presence of oxygen increases the problems.

Once out of the earth’s Atmosphere, speeds can increase without the corresponding temperature increase and again ceramics are at the forefront. The development of Electrical propulsion in space has led the way to reducing the cost of satellites, and space exploration, where photon energy from the sun is converted to electrical energy, which is used to propel plasma over a ceramic insulator. The ceramic a BN/AlN compound (Shapal Him soft) or a BN material such as PCBN5000 with excellent electrical insulation allows the plasma to accelerate to up to 20,000 meters a second.

The current record holder is the Juno probe at 165,000 mph, an electrically powered spacecraft.

Speak to an Expert