There’s nothing like a game of table football to get the blood pumping. But when the ‘table’ is swapped for a life-sized version and the plastic players are substituted for real ones, the challenge becomes a lot greater!

And in a recent fundraising event for a local baby hospice, a team from Precision Ceramics not only took up the challenge but won the competition! 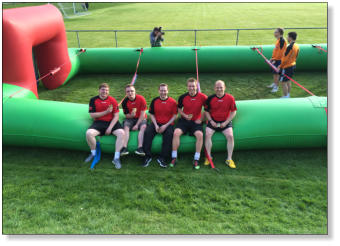 Human table football has been around for some time now and is played on a special pitch with inflatable sides roughly eight times bigger than a conventional ‘pub’ table. It is a far cry from the original idea conceived by Tottenham Hotspur Supporter, Harold Thornton, back in 1922. Harold wanted to create a game that simulated football that could be played at home. Inspired by a box of matches, by laying the matches across the box he formed the basis of his game which was subsequently patented a year later. How Harold would have marveled at this ‘human’ version of his original concept which has nowadays become a popular means of both team building and fundraising.

Precision Ceramics were invited to enter a team for this latest event which was jointly organised by Yorkshire Bank and Clydesdale Bank on behalf of ‘Zoës Place Trust which opened a new facility in Coventry in 2011. It was part of the banks’ ‘Business Week’ programme and was staged in the grounds of Birmingham City University.

Eight teams took part from a number of local businesses and each played four games – three games in league format and a final match to decide the placing. Teams were mixed and consisted of five players each. 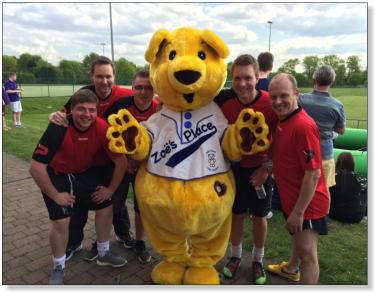 And so well did they play that they won 2-1 in the final against Birmingham Aluminium to take the trophy and be named inaugural champions! But even more importantly, our intrepid Precision Ceramics team helped raise a staggering £500 for the local Zoës Place Baby Hospice.

Zoё’s Place Trust is a registered Charity providing palliative, respite and end of life care to babies and infants aged from birth to five years suffering from life-limiting or life-threatening conditions. This care is provided in a caring, safe, home from home environment known as Zoё’s Place Baby Hospices.

They receive very little government funding and therefore rely heavily on fundraising and donations. Further information is available at http://www.zoes-place.org.uk/

What a great cause and what a fantastic effort and result by Ben and his team.

Hearty congratulations to all concerned.