After a successful career with the McGeoch Organisation spanning 32 years, Nigel Johnson retired from Precision Ceramics on Friday 31st May. 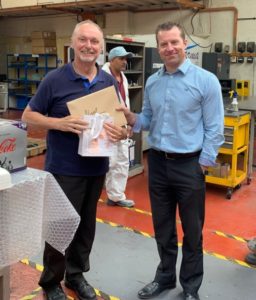 Following an apprenticeship with Auston Rover, Nigel joined the Delta Organisation in 1987 before moving to Rouse Thompson & Lloyd in Lower Tower Street, Birmingham a few years later. When the RTL business and premises were taken over by McGeoch, Nigel continued to use his machining skills to cost components for BOC, his wide knowledge of materials and processes enabling him to prepare detailed cost structures.

Nigel was heavily involved in producing prototypes of the EIGA Couplings which became a European standard for the safe transfer of cryogenic gases into road tankers and was instrumental in their roll out across the whole of Europe.

He was also largely responsible for systemising the Precision Ceramics business in 2000 and continued to manage the engineering processes alongside his work in gases until his retirement.

Among his past glories, Nigel was a keen American Football Player for Birmingham Bulls. He was also a keen photographer and among the many retirement gifts he received were vouchers to purchase some additional camera lenses.

In his research of family history, Nigel discovered that his grandparents lived in Ward Street, Birmingham which borders the current McGeoch premises.

Nigel is the proud owner of a motor home and is looking forward to exploring more of the UK with his wife Debbie. 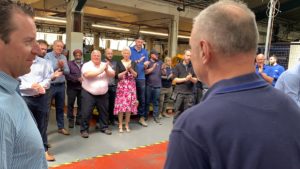