Over the years, ceramics have found their way into many specialised fields, but ballistic armour has to be one of the strangest.

In the aftermath of World War II, the search to find new methods of reducing casualties became paramount, especially as the increasing development in rifles and guns, and more particularly their rate of fire power, led to an arms race between body armour and ammunition.

Who would have thought that to defeat the impact of a bullet, a non-metallic hard but brittle material would eventually offer the protection required? But in the post WWII years the key to this armour performing was not only the ceramic but the development of high tensile fibres.

Specialist fibres, capable of being subjected to high temperatures without melting or setting on fire whilst maintaining incredible strength took priority. When woven into sheets, the strength of these fibres was further enhanced and when multiple sheets were bonded on top of each other, it got to a point where they provided sufficient protection to stop smaller, slower gunshot rounds.

The arms race soon surpassed this early type of armour and metal plates were incorporated to protect the most vital parts of the anatomy. Being heavy, the additional weight reduced what else the wearer could carry and as metal cored rounds became increasingly sophisticated and powerful, the weight factor became more of a problem with additional metal being needed to offer protection. 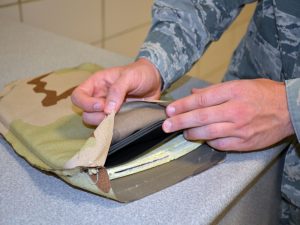 In body protection the ceramic worked differently to metal. The ceramic broke at the point of impact. The broken ceramic pieces shredded the bullet, dissipating the energy over a much wider area, and reduced the penetration. This enabled the high tensile backing material to catch the bullet remains and ceramic fragments much like a wicket keeper’s glove.

Different thicknesses of ceramic could be used against different threats and as the efficiency of rounds increased, the increased ceramic thickness had to counter the threats, until a point was reached when even the weight of ceramic became an issue. The standard alumina ceramic was then upgraded and even lighter harder ceramics were used; silicon carbide and finally boron carbide.

There was one drawback. As it was necessary for the ceramic to break to absorb energy from the round and the broken pieces to shred the bullet, if multiple hits occurred close together, it was quite possible for the ceramic to be overwhelmed and for a subsequent round to pass through a previously broken area. This, in turn, could mean that the round might not be slowed sufficiently to be caught by the aramid layer. However, the chances of multiple hits are slim as the energy from a single round when stopped is usually enough to move the wearer out of the path of successive hits.

The cost of replacing a ceramic plate can be expensive but weighed against the life or serious injury of the wearer it has saved, the replacement cost is never an issue.

In the early stages of using ceramics for ballistic armour, the plates started as small flat tiles with lots of joints which were neither comfortable nor fully efficient. Development continued and the plates evolved into a single piece complex geometry shaped to fit the body. Separate front and back plates covering all the critical soft tissue areas were developed which were more comfortable with less joints and considerably easier to laminate to the aramid sheets.

Nowadays, the efficiency of this system can be seen in every area of civil or military conflict throughout the world where the provision of extreme personal protection is a vital factor in reducing casualties.

The continuing battle between the armour and the threats used against it is never static and ever evolving.