“I first came across a ceramic ball race many years ago when I was handed one which had broken into several pieces! The failure of this assembly should have pointed to limitations in the material but as it came from a Formula One Racing Car which had been driven by a certain Mr Michael Schumacher, the cutting edge of the technology behind it became infinitely more interesting.

The ball race, weighing a fraction of its steel equivalent and having being subjected to extreme temperature cycles and mechanical loads before its failure, was impressive. I never did find out how it met its ultimate end but I would like to think it failed spectacularly, totally exceeding expectations and not through the fault of a heavy handed F1 mechanic. 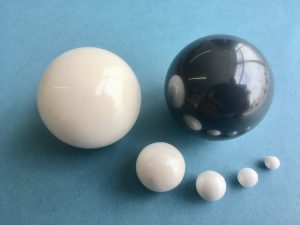 These perfectly spherical ceramics, smooth and with a wonderful tactile feel, soon moved out of simple bearing applications and into mainstream engineering using the full spectrum of oxide, nitride and carbide ceramics available.

One of the most common applications for ceramic balls is the ‘Biro’ or ballpoint pen, its writing function enabled by a tiny ball made from tungsten carbide, a hard and durable material, capable of far outliving the short life of a pen. Watching machines grinding these tiny balls – more than 2,000,000 in a 24-hour cycle and to a tolerance better than 0.0004” was not only impressive; it was positively hypnotic!

The use of lightweight tiny balls or ‘jewels’ in low-wear applications such as high specification watches and domestic water meters provided a long, trouble-free service life and extended the range of materials being used. Here, ruby and sapphire came into their own. The evolution of tougher materials such as silicon nitride and yttria stabilized zirconia, provided further opportunities for ceramic balls moving on from silicon carbide which was hard but lacked the impact resistance and toughness for the more demanding applications.

In ball valves, where steel balls up to 150mm diameter were quite common, zirconia provided a lighter and more chemically resistant option. The balls, at 6 grams per cc, were still relatively heavy but exceptionally tough. I remember watching a test where a 25mm diameter zirconia ball was bounced repeatedly on a concrete floor from a height of 1 metre. This not only inspired design confidence and belittled fears, it was the answer to an engineer’s prayers.

The range of ceramic materials now available has led to ceramic balls becoming an off-the-shelf commodity and ready for use in applications as far reaching as medical, automotive, offshore oil and gas and wind power. So next time you gaze on a line of wind turbines stretching out as far as the eye can see, it’s more than likely that silicon nitride ceramic balls are playing an essential role in keeping the blades turning.”

Geoff Randle is a specialist in technical ceramics in a career spanning 40 years. He is a director of both McGeoch Technology and Precision Ceramics. Geoff also became an Executive Vice President of Precision Ceramics USA when the first overseas subsidiary of the company was formed in Tampa, Florida, 2009.